Take a Bite Out of History – The Origin of the Hamburger

Posted at 21:29h in Hilton Head Dining by witty

Few phrases in the English language are more enticing than, “Let’s have a burger.” Americans love hamburgers more than just about any other food, eating 50 billion of them per year and powering an industry that is worth over $100 billion annually. How did the once humble burger (made of ground beef, served on a bun, often with other condiments and toppings, sometimes with cheese) become so crowd-pleasing? 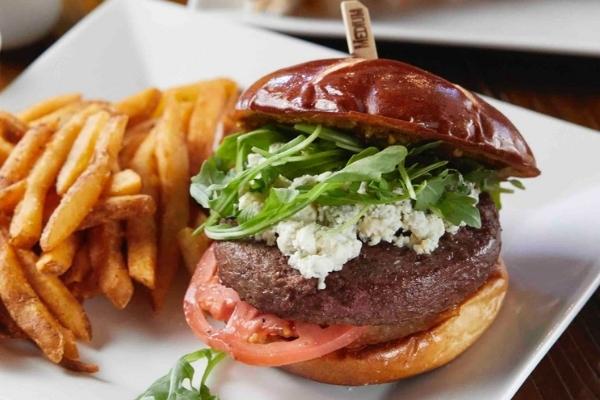 Here at Charbar, home to Hilton Head’s best burgers, we decided to take a look at the original evolution of this storied sandwich.

The mighty hamburger is a quintessentially American dish. Like America, the hamburger is a melting pot of origin, history, and some tall tales. It exhibits American ingenuity at its best – taking something good, improving it, and making it our own.

Before taking the deep dive, be forewarned that much of the hamburger origin story is cloaked in mystery and numerous claims of the invention. Many make claims to creating the first hamburger or try to claim parts of its history. Even usually reliable sources make assertions that can be challenged and have been shown to have a high probability of being incorrect. That said, let’s try and separate (as best we can) the facts from the fiction.

History of Minced Beef (but a Charbar burger is much more)

Some food historians trace the origin of the hamburger back to ancient Rome, citing a minced meat dish with pine nuts, pepper, and flavorings of wine. (When in Rome, right?)

Surprisingly, Genghis Khan and his Mongolian horseman also figure in hamburger history. Mongolian horsemen would stash raw meat under their saddles to take on long journeys and into battles. Spending long hours in the saddle resulted in the meat being pounded tender, often breaking into smaller pieces, allowing the horseman to eat the raw meat.

Yet, a New York Times article questions this narrative. The meat actually put under the saddles was meant to help heal a horse’s sores rather than fill the riders’ stomachs. The meat, which in all likelihood was horse meat, would probably have been so full of sweat, mud, and God knows what else, that it would have been inedible by the end of a day.

Yet, there is evidence to suggest that the Mongols did take scraps of raw meat and form patties. When Kublai Khan (Genghis Khan’s grandson) invaded Moscow they introduced this form of minced meat. Russian chefs adopted it into their own cuisine and added ingredients like eggs and onions, the precursor of “Steak Tartare.” 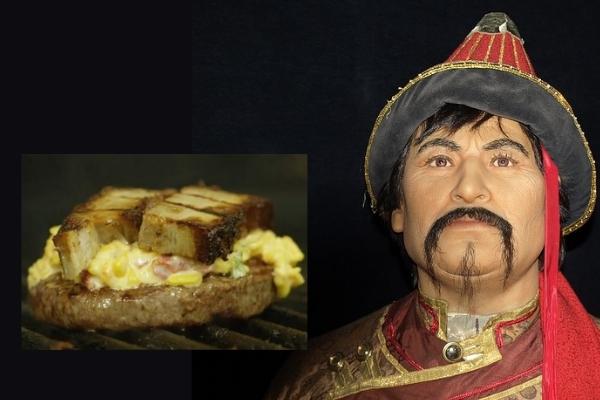 Raw minced meat came to be a fashionable dish in Russia, and by the 1600s ships from the German port of Hamburg began sailing to Russian ports to engage in trading foods, spices, clothes, etc. During this period, the Russian steak tartare was brought back to Germany.

Food stalls, restaurants, and immigrants in New York City are all said to have adopted hamburg steak from the new arrivals from Germany.

Where Did Hamburgers Originate? Who Invented the Hamburger?

This is where things get sketchy. Somewhere between 1885 and 1904, the hamburger came into existence. The individual who actually crafted it is up for grabs and there are quite a few states that battle over this title to this day. So let’s examine the lengthy list of contenders.

A word of caution: There is no hard evidence for any of these claims as they are stories told by descendant family members or other third-hand accounts. With no written or otherwise documented proof of origin, any (or none) of these stories could be the real originator of the hamburger. Yet, they are fiercely contested. Read on as we examine this confusing food history.

The story goes that this young man (15 years old) was selling meatballs at the local fair in Seymour, Wisconsin, in 1885. People were not buying them. Just like today, we like things to be mobile at a fair, either on a stick or some other gizmo that would make the food more convenient to handle.

Charlie decided to flatten the meatballs and put them between two slices of bread. They were a hit, and “Hamburger Charlie” returned to sell at the fair every year until his death in 1951.

The town of Seymour, Wisconsin, is so positive about the claim that they built a Hamburger Hall of Fame to honor Charlie Nagreen. The town has signs proclaiming “Home of the Hamburger” and holds a Burger Festival on the first Saturday in August every year. 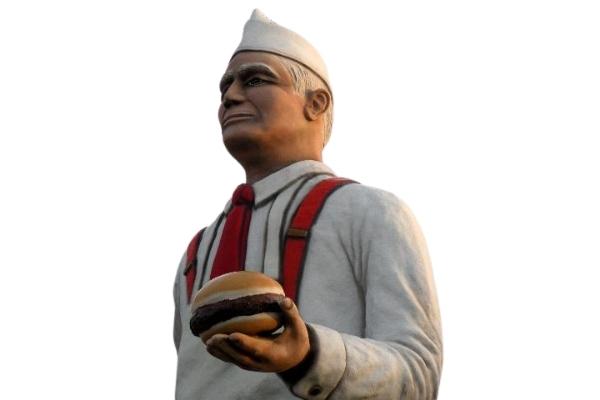 Another origin story suggests that the hamburger’s name originates not from Germany but from New York state.

Brothers Frank and Charles Menches came from Ohio to sell food at the Erie County Fair in 1885 in Hamburg, NY and ran out of pork sausage. They went to a local butcher who gave them ground beef. They seasoned the meat with coffee, brown sugar, and spices and put it between two slices of bread.

According to family legend, Frank did not know what to call the sandwich, so he looked up and saw the banner for the Hamburg fair and said, “This is the hamburger!” The rest, apparently, was history.

You can still visit the Menches Bros. restaurant in Akron, Ohio. They also claim to have invented the ice cream cone and the idea for Cracker Jacks. 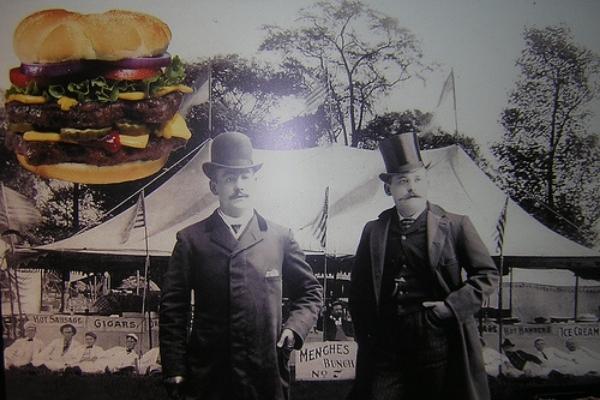 Oklahoma has its own claim to the hamburger’s origin. On the 4th of July, 1891, Oscar Weber Bilby built an iron grill at his ranch near the community of Bowden, Oklahoma.

He shaped some freshly ground Angus meat into round patties and fried them on the grill until they were juicy and delicious. He served them to his friends on his wife’s homemade yeast buns along with freshly churned ice cream and hand-mixed root beer. This is the first record of ground beef served on a bun. The meal was so fantastic that the Fourth of July feast became an annual event sometimes bringing in a crowd of 125. Bilby never sold his “hamburgers” commercially. 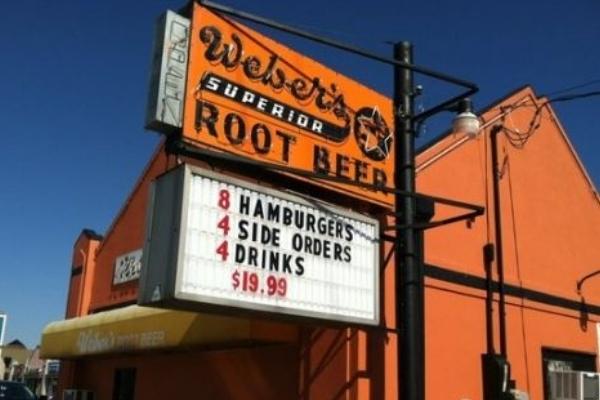 On April 13, 1995, Governor Frank Keating proclaimed that the first true hamburger on a bun, after meticulous research, was created and consumed in Tulsa, OK, in 1891. He thus called Tulsa: “The Real Birthplace of the Hamburger.”

Another hamburger origin story comes from a little lunch place in New Haven, Connecticut. In this tale, the hamburger was born out of convenience, quite literally, the need for fast food.

In 1900, a man came into Louis’ Lunch in a big hurry and asked owner Louis Lassen for something he could eat on the go. Louis grilled some steak trimmings, put it between two slices of white toast, and sent the happy customer out the door.

Louis’ Lunch has been making its hamburger sandwich continuously since 1900 making it the longest operating hamburger restaurant in America. 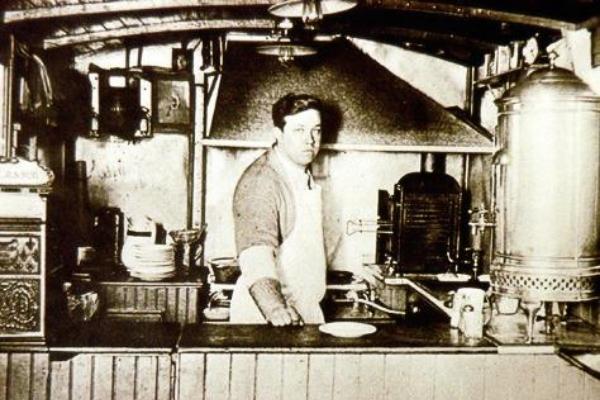 And while the world has largely adopted the plain white bun as the bread of choice for a burger, Louis’ Lunch continues to serve them on toast and in their own distinct manner: vertically grilled with the only permissible additions being onion, tomato, and a cheese spread. The spread is necessary because the unique vertical broilers that Louis’ Lunch uses would not be able to accommodate regular cheese. Don’t even think about putting ketchup or mustard on a burger at Louis’ Lunch. There is a sign admonishing against even asking for it because, as Jeff Lassen (fourth-generation owner) says, “We want you to taste the meat.”

There are challengers and detractors to Louis’ claim as the creator of the first hamburger. Author Josh Ozersky in his book The Hamburger: A History claims that this sandwich is not a hamburger because of the use of toast instead of a bun.

The argument is semantic to a degree, but Ozersky has a point: a burger served in a bun is instantly recognizable the world over as a hamburger. Show most people a Louis’ Lunch burger and they will probably not recognize it as a burger but as a sandwich. But Louis’ Lunch has steadfastly stuck to its roots for well over a century.

Bert W. Gray of Clarendon, Iowa, never took credit for having invented the hamburger. However, in an interview with the Omaha World Herald in 1956, he did stake the claim of being the “daddy” of the hamburger industry.

His hamburger business started in 1901 or 1902 (he wasn’t sure of the year) when he operated a little cafe in Clarendon, Iowa. Gray was acquainted with a German butcher in the town. The butcher suggested that Gray use ground meat to make a sandwich. Gray decided to experiment.

First, he took some ground beef and mixed it with egg batter and fried it….but he couldn’t get any customers to eat it. So he quit the egg batter and just mixed the meat with a little flour to hold it together. 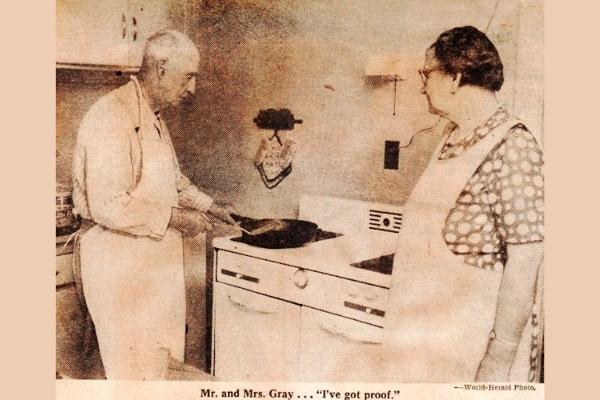 The new technique paid off. He could make the hamburger nice and juicy. He bought some soft buns from a bakery and served his creation with chopped onions, ketchup, or mustard (sounds like a proper burger to us). Being the butcher who gave him the idea was from Hamburg, Germany, he decided to call his sandwich: Hamburger.

This hamburger was such a hit that he almost ran the other cafes out of the sandwich business.

Fletcher Davis, better known as Old Dave or Uncle Fletch, allegedly began making a burger-like sandwich in the mid 1880s in Athens, Texas. But it was the 1904 World’s Fair in St. Louis, Missouri, where he made it famous. This story has so many twists and turns and it seems to be a tall tale. As everything is big in Texas, this is a Whopper (pun intended), and articles in the LA Times (with the headline “Want Lies With That?”) and Texas Monthly seriously question this claim.

The LA Times article was written when the Texas legislature tried to declare the Lone Star State the Home of the Hamburger. 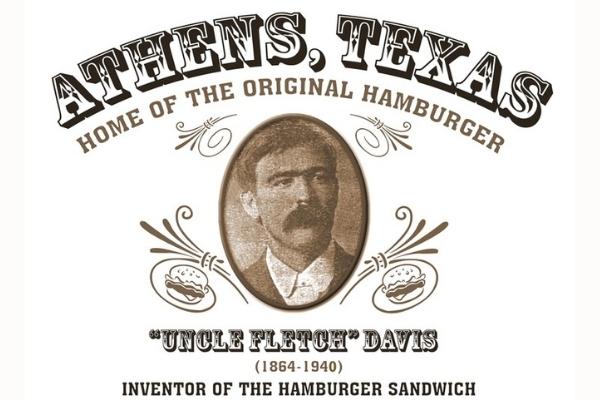 In 1916, Walter Anderson (a fry cook from Wichita, Kansas) developed a bun to especially accommodate hamburger patties. The dough selected was heavier than ordinary bread dough, and he formed it into small, square shapes that were just big enough for one of his hamburgers. Five years later he co-founded White Castle with Edgar Waldo “Buddy” Ingram and the world’s first burger chain was born with standardized burgers. 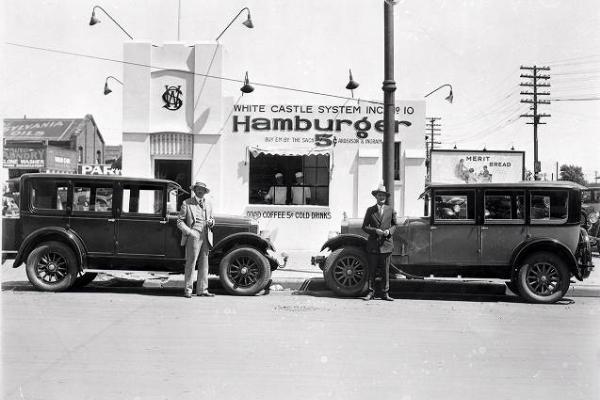 They Can’t All Be True….Or Can They?

You’ll notice there is a lot in common among the stories of the hamburger’s birth. All of them take place within a time span of 20 years, between 1885 and 1904. All except Louis’ Lunch and Bert Gray happened at fairs or big summer events, places where ideas could spread. In many cases, the hamburger was born out of need for convenience, like portability and speed.

It is quite possible that there is truth in all these hamburger histories (Fletcher Davis is the shakiest). Perhaps the fact that all these accounts occurred around the turn of the century is more than just a coincidence. It was a time following the industrial revolution. More people were working in factories and living in cities. Sandwiches became popular food because they were a cheap, quick meal that was easy to eat.

It’s not too much of a stretch to believe that all these people could have come up with a similarly novel, yet quite simple, idea around the same time.

In our opinion, a hamburger is a meat patty that is on a bun (in its simplest form), so our official vote is going to Oscar Weber Bilby and Bert W. Gray just because a beef patty between sliced bread does not make a hamburger. Just a beef sandwich.

Wow, that was down the rabbit hole and back. Hope you found it interesting. Just remember, whoever invented the hamburger, Charbar has perfected it! Join us and you will see why we serve the best hamburgers on Hilton Head.